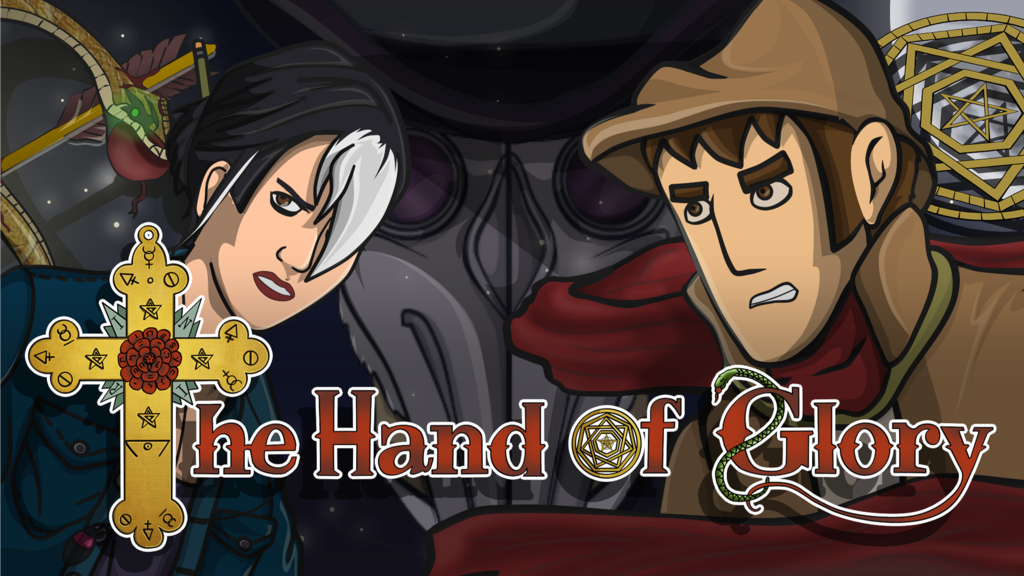 The Hand of Glory

A new, epic point and click adventure that will lead you through the world!

Latest Updates from Our Project:

Here we are again, with the first update post-launch!

The Hand of Glory has been out for a few months, now, and we're super happy with the reception it received! Let's see what we were doing while you were playing it!

Many of you were eagerly waiting for the German subtitles to be added in the game. We promised them during the Kickstarter campaign, and our translators worked hard to deliver the best work they could. Considering the HUGE amount of text they had to face, they're like HEROES to our eyes!

After a few months of translating and some problems during the actual implementation of the subtitles in the game, we're happy to tell you that the moment has finally arrived!

Today, May 10th 2021, the German subtitles for The Hand of Glory are available!

Mac and Linux players, we hear you! Here's why we haven't released those versions yet: during the tests, we encountered several problems we weren't able to solve due to the Visionaire engine version we were using. After many discussions, Insult Sword Fights™ and a few sleepless nights, we took a hard but necessary decision: rebuilding the entire game with the newest version of the engine.

There is a lot of work to do, but we're happy to report you that the latest tests are very promising, as we encountered only minor bugs while we were finally able to solve the biggest ones.

This new version of the engine will also allow us to develop the Switch porting of THOG, therefore from now on we're aiming at a (almost) simultaneous release of the MAC, Linux and Switch versions of the game. We don't have a precise release date for you, but we'd like to publish them after this summer!

While we were waiting for the German translation and trying to solve the aforementioned problems, we were also working on the physical rewards! Here's the situation so far:

*** No offense to any FPS player was intended. We love you. We even play them (but we suck)

Wait for it, we have another surprise in store for you!

Thanks to an agreement with a dear friend of us, Javier Cadenas from enComplot (developer of The Season of the Warlock, an upcoming adventure game you should definitely check out) we will be able to add another language to THOG: ¡Oh, sí, hermanos, subtítulos en español están llegando!

Now, we are not able to give you a release date as we don't want to hurry the process, but we're aiming at having them ready for when the Switch version of the game will be out! Stay tuned!

That's it for this newsletter. It was explosive, wasn't it?

To be completely honest, we would have another small surprise for you, buuut... we'll keep it for the next update!

Keep following us on our socials (Twitter, Facebook and Instagram) for more news, and remember to leave a review on Steam if you've played The Hand of Glory (we really, really, REALLY need it)!

We're here!
The day has finally come: the second and final part of The Hand of Glory is now officially available on Steam (Itch.io version coming tomorrow!)

You all have your keys, so in order to play Part 2, you will only need to:


What are we going to do now?

Well, even if the game is out, we still have some tasks ahead of us:

And here we are, at the end of the most important update of this project, ready to draw the conclusions.

The development of The Hand of Glory was long, tough, sometimes exhausting, especially considering the strange times we are all living. In the end, we managed to do it.

But the reason we managed to do it, it's YOU.

Yeah, you, dear backer, because one year and a half ago you decided to give us your trust, and you allowed us to live our dream. We hope The Hand of Glory will repay you, and that you will enjoy it as much as we enjoyed writing it.


The End of Glory?

We came, we saw, we developed.

But tomorrow is a new day, and we have absolutely no intention of stopping now. We have tons of ideas for future projects, games that we can't wait to start working on, new crazy characters and locations we want to write about!


The future is full of adventures, dear backers.

Hey, guys, here we are again with our monthly update. This one's special, because it's the last pre-release one!

We're very excited to share what we've been doing, so let's begin right away!


We listened to YOU

The first part of The Hand of Glory received great reviews both by the press and by players all over the world (you backers included)! Not only the feedback we've collected was fulfilling, but it also helped us improving the second part. Here's the major changes you will find:


Our work in the last month

As you can imagine, things have been dramatically frenetic during the last few weeks. Here's what we've been up to:

We're so close to the release of the game we already can't sleep at night! Here's our official plan for the months to come:

It's a strange sensation, almost like being on the edge of a cliff, but we're almost there. This has been a great journey, full of joy, surprises (we'll never forget the end of the Kickstarter campaign), but also struggles and challenges. Let's be clear: we couldn't make it without you guys. Without all of you who supported us, tolerated our delays and believed in The Hand of Glory.


As always, we need to close this update by asking you one last push, some things you could do to help us even more:

1- Follow us on all the social networks (except Tik Tok, we're too old for that!);

2- Share our game everywhere you can (social groups, forums, your rich neighbor, be inventive)!

3- PLEASE, leave a brief review on Steam! You have no idea how much help it is for us to survive in the market!

And that's it. As always, thank you for reading and for supporting.
Stay safe, everyone!

Welcome to Update #22, probably the last one before the official release of The Hand of Glory – Part 2. We have some fresh news for you, so let's start right away!

As you know, Part 2 was scheduled for September. Unfortunately, we need some more time to polish the game and test it properly. We are currently working on the voice-overs, and we want it to be as good as the first part of the game. While some members of the team are recording, mixing and polishing tons of audio files, the others are adding animations, details and close-ups. We want your game experience to be as rich and polished as possible.

The new and final release date will be November 18!

However, we will start giving beta access to Part 2 to those of you who purchased the Beta reward during the Kickstarter campaign. If you're one of those backers, we'll contact you as soon as we can!

At this point of development, the assets for the game are finished, and we would like to give you some information about it. The Hand of Glory will have:

And here's a new scene directly from Part 2!

As you can imagine, the game style will slightly change from the first part. Expect some tomb-raiding, ancient puzzles and medieval legends, all surrounded by the wonderful landscape of Italy!

This comes out of nowhere: during the last months, we obtained the devkit and started developing The Hand of Glory for Nintendo Switch!

The porting process won't be easy and it will take some months, but the first results we obtained are really promising. Here's a sneak peek!

We're very close to the final release, and you could do two things to help us during this phase:
1. Please, help us spread the word around as much as you can;
2. If you liked part 1, leave a small review on Steam!

Both things would help us A LOT! See you soon!

We’re finally there (half-way, at least)!
The Hand of Glory – Part 1 was officially released yesterday and what a launch day it was! The response we received was just great, both from the people and the press.

Now we want to reach as many people as we can, but to do this we could need your help once again. There are some ways you can do that:

· By sharing our Steam page, our new trailer (see below!), or our social pages;

· By spreading the word in any way you can (Facebook groups, Discord servers, friends, acquaintances…);

· By leaving a review on Steam! This is very important, even a short one can really help us getting noticed, or convincing someone to give us a chance and buy our game!

And now, on with some updates!

As you know, Part 2 is coming on September. We can confirm you we already have all the graphic assets ready and we’re very proud of the result we achieved. Part 2 is going to be a great adventure in the green Italian hills, with waterfalls, ravines and a medieval, charming setting (expect some dark, ancient places too)!

Don’t forget that, thanks to you all, Alice will also play an important role, looking for help in the Eternal City, Rome.

What you don’t know is that Italy won’t be the last section of the Hand of Glory, because every adventure needs a final location, where everything will come to a closure. We don’t want to tell you exactly where the journey will end, but we want to share with you a screenshot nonetheless. Here you are!

Some of you were waiting for the Mac and Linux version of the game to be released the same day as the Windows one. Now, while we really wanted to, we couldn’t deliver due to some technical problems that emerged during development. Both versions work, but there are some things we’d like to finetune before officially releasing them, especially on the Linux port.

Despite this, you can already try the beta version (information here: https://steamcommunity.com/app/961010/discussions/0/2291716608427282599/). Our testers finished the game, they’re not incomplete, they don’t have major problems, especially on MAC. Just be warned that some minor bugs may occur.

We’re so happy with the final trailer that we’d like for everyone to see it! Here it is!

Last but not least, we wanted to remind you that we have a Discord Channel waiting for you all. You can use it to ask for help if you’re stuck, report a bug or just chat with us!

That’s all for now. We just want to take another moment to thank everyone of you who already played The Hand of Glory, those who commented on our socials or via private messages, and obviously everybody who will play it in the future.

To the next update!